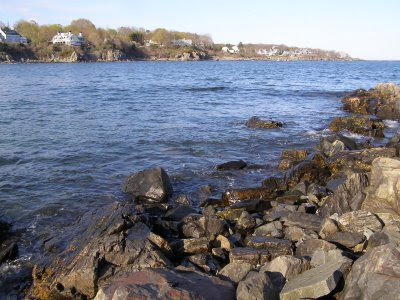 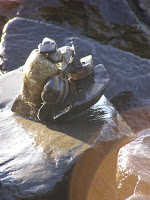 It was a too quick visit with Gary Lawless at Gulf of Maine Bookstore in Brunswick, Maine yesterday. As usual I left him a stack of Benevolent Bird publications to give to friends and some for sale. Bought some books too. Of note Ralph Maud's biography Charles Olson At The Harbor ( a book I have Albert Glover's review of. A review I'm holding on to until it is first published in some mag in Australia) and Jonathan Skinner's new poetry With Naked Foot out of little scratch pad press, Buffalo, NY. Jonathan Skinner, I know from Gary and some communication between us. Skinner has interest in ecopoetics and holds a professorship at Bates College. Gary was in the back eating and was soon to be off to visit his 92 year-old mother.
He and Beth Leonard were leaving for France in a few days with trip focus on getting close to animal paintings on cave walls. He was looking forward to his art exploration and I expect something to be written of what he can glean of the motivation behind those who crawled deep inside rock to leave images of the hoofed and clawed painted by light from flickering flame. It is all spectulation as to why? he reminded me a couple of times. Franz Boas in Primative Art writes of both symbolic representation and representation by means of perspective. In North American northwest coast art the whole animal form is presented as an assembly of 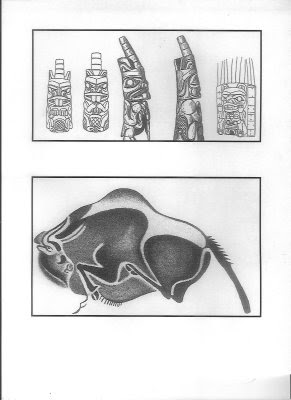 disconnected symbols. A beaver is adequately represented by a large head with two pairs of large incisors and a squamous tail. It is in the painting of later paleolithic found in the caves of southern France and of Spain that Boas finds perspective realism "fully developed" Interestingly, Boas does not find perspective of groups in these paintings but rather of the single figure. Much has been analyzed and discovered since Boas wrote in 1927 and so I bet many more cave painting images are available for study. Perhaps Gary can let us know if he sees the herd and pack represented in the cave art he sees and also if he thinks the artist is actually creating a picture of a specific animal and not a symbolic representation of the animal kind?

I got to talk about the reactions of some poets to his poem Lynx Liberation Communique. Art Willis had told me he had seen a mountain lion near his property close to here in the Normanskill watershed. That got us talking about different wild cats and I mentioned Gary's poem which I then sent to Art and a handful of others. A few of the comments were interesting and I thought worth running by Gary. Starting with Albany poet Dan Wilcox who commented "Nobody votes, they just eat each other" Gary thought that was a good comment. He said he wasn't trying to imply anything having to do with democracy or even the standard political process which wasn't working for the benefit of the lynx at all. Two Republican Senators and a Democratic Governor had not resisted Federal actions during the years of George W. Bush that offered no protection for the lynx forest habitat in the entire, every square mile of the State of Maine. It was the political power of the land developers (former lumber companies) that put the lynx in a bad situation. At least Gary was able to tell me that the Obama administration had changed course and that now a sizeable territory of the northern Maine forest was protected. For the lynx and other animals, Gary said it was presumptuous to think you could take their side and speak for them and yet by undertaking that poetic voice you could gain consciousness and something of a different species view on important matters. I shared my response to Dan Wilcox:

"No backbone no franchise to vote", Gary said. And also on the whole democracy question "They vote by their diet."

The other comment on on Gary's Lynx Liberation Communique was from fellow bioregional poet Stephen Lewandowski, who wrote "wishful thinking." I wrote back to Stephen "Gary Lawless has that quality. Chanting the words. I'm sure not naivete but in the face. Hey "wishful thinking" you already said that." Gary went though almost the same circle of thought to arrive back at Yes, wishful thinking. He agreed that his poetry is wishful thinking, magic words. He originates his poetry in traditional shaman song and storyteller form. The realized imagination shared with all gathered. Speaking from a world that has been lost but not destroyed or disappeared. Check out another poem of his in Big Powwow, I still talk to the animals.

That was another time when
We knew there were other worlds

My too short trip to Maine ended with some time at the Atlantic. Looking up and down these posts, I see I am becoming quite the nature photographer but I guess you can't post from Maine without some water spray.