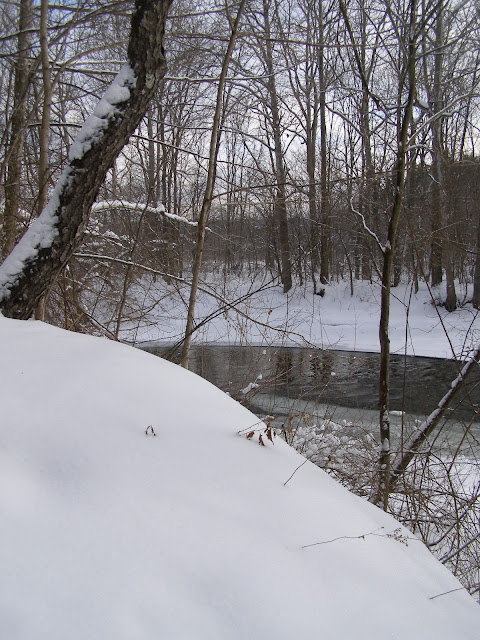 Kinderhook Creek
It has been a great "old fashion" winter here in the northeastern woodlands. Last few winters have been too warm with little snow until February and March. Those late winter storms carry lots of moisture and are helpful for filling the streams but we haven't had a socked in storm piled on storm winter where the snow level goes up and down but never leaves until mud season finally arrives in more years then I can count. That's what we have this winter and despite the snow shoveling I think the earth is more comfortable covered under a blanket of snow and breathing cold air which translates to my comfort too. My daughter Liz gave me snowshoes and I have been watching the weather and snow conditions for the right days to head for the woods. I used to cross-country ski and for backyard trekking I know from experience some winters there are only a few perfect days and if you laze your way past them you are out of luck till next winter. Ever since I got the snowshoes I've been thinking about the hollow of land "cup of water" Tsatsawassa where Bernadette Mayer and Philip Good live. In early January I had found the book Mills on the Tsatsawassa (1983) by Philip L. Lord, Jr. in a bookstore in Saratoga Springs, N.Y.. It is a book I knew about because I researched the area as I wanted to understand the looping and winding of Kinderhook Creek and the confluence of other small tributaries that created the Tsatawassa "cup" but I never thought I'd actually see a copy for sale. When I did I bought the book for Bernadette and Phil. Now as I set out on my choosen perfect day, I was thinking it won't be a problem if they are home to be allowed to snowshoe down to the Kinderhook but just in case I brought a few trade goods. Besides the mills book, I had a bottle of wine and a set of the 2010 Benevolent Bird broadsides plus the mini-book Ten Thoughts About the Eternity of Day by Dennis Sullivan that I used graphics from the exterior plates of Gundestrup Cauldron on. The Cauldron is subject of a current obsession of mine as will be referred to later in this post when we get to the "snakes" part. Phillip was away at work but Bernadette made me welcome (you can't get that many visitors on that road in January). I did my snowshoe trek following animal tracks and staying up on the banks above the Kinderhook Creek. 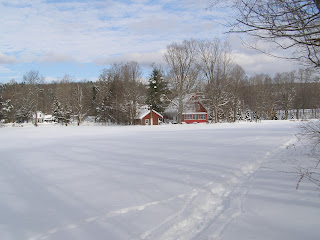 snowshoe path
There was a layer of hard crust on top of about a foot of powder and on top of the icy crust was about ten inches of fresh soft snow from the last storm. The snowshoes cracked but did not break through the icy layer and the going was pretty easy--held up above the layer of deep snow. I turned up the Tsatsawassa Creek past a low area which showed signs of previous flooding and went on to where the road crossed above and climbed up the steep bank. I got my snowshoe caught under a layer of crust, fell, and had to back up and restart twice before I came out on the roadway again. 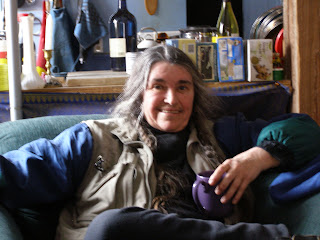 Bernadette Mayer January 2011
Back inside again, Bernadette and I fell into our conversation. It was talking about things like different strategies of insulation for which she encouraged me to take a trip to see the attic room, snow for snowshoeing and the need or not for ski poles when doing it. Also the history of the house (which was very interesting to me, twice a church for different congregations and then owned by a Rabbi -- when Bernadette moved in the rooms all had numbers on the doors and they would joke "I'll meet you in room 3 at 8:15") 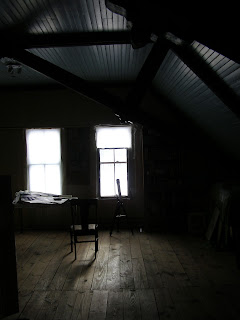 The topic we spent the most time talking about was snakes. It was the Gundestrup Cauldron that pointed me towards the Celtic two-headed snake which is found in the interior detail. Celtic warriors wore two-headed snake torques as armbands. Bernadette knew of the Celtic symbol but didn't know any particular myth or story. She thought that maybe the two heads got into arguments, they disagreed. I don't know why I would get interested in any subject having to do with snakes because they make me uneasy. As I told Bernadette, it is not the sight of a snake, I can look at a snake, watch a snake--it is the rustling, the movement sound that startles me, gives me the heebie-jeebies, makes me jump (supposed to be a survival instinct as old as upright man). She is not brothered by snakes but said she has a friend who also has a snake phobia and whenever the friend visits and they go for a walk, they see snake after snake after snake. The snakes showing themselves. Bernadette asked me if I thought there was a decline in the garter snake population. We both fond of these foundation and sun loving little creatures. My mother had names for favorites who lived in the loose limestone flowerbed walls my Dad hauled stone for and rebuilt every Spring after frost heaves. I said I didn't think there were less garters as I am still seeing them regularly and have a number of nice photos of garter snakes that I have taken in my own Normanskill Watershed.  I'll have to research it. I know there is a world-wide problem with frog and other small reptiles "disappearing" to possible extinction and I've already got bees, herrings and brown bats on my watch list. 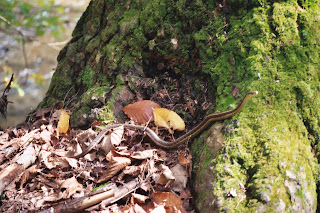 garter snake at Christman Preserve
It was kind of an abrupt change of topic and really it was cool to just shoot the breeze but I thought I should ask Bernadette something literary if I was going to go to the trouble of writing some of our conversation up and what she had to say was pretty smart. I said, "I've often stated the position that I would not change a word in one of my poems for the sake of a particular poetic form. There are many poets who do, who change the language to make it fit the requirement of a form." Bernadette Mayer said well it would depend on how much you liked that particular poetic form. She said she could do that, she could take a Bernadette Mayer poem and then write a second Bernadette Mayer poem with the same words but an entire different form and put them both out there side by side. She said she didn't see any reason why a poet couldn't just have one poem they had written in their lifetime and just continually write the poem again and again, each time using a different spacing, line breaks, placement on the page. Made me realize I was thinking of form too narrowly.
We talked some more about wintercold. She said, "Before you go I have to show you my icicle. I show it to everyone who comes and visits." Outside the small kitchen window a massive icicle flowed down. A distance from the side of the house with the lightcatcher still maybe a body length to go before it reached the ground. A great season for icicles as well as the deep snow.
Where had I learned of the Philip L. Lord book? I googled Tsatsawassa because I wanted to understand and draw a map of the different streams and waterways that came together to make the landscape so unique around Mayer and Good's neighborhood. There are not that many internet addresses that mentioned "Tsatawassa." as I told Bernadette. There should be one for the magazine THE TSATSAWASSANS she thought so I volunteered to put notice of it here. THE TSATSAWASSANS is edited by Bernadette Mayer and published by Mademoiselle de la Staples Press. There are still copies of ISSUE #2 available for $7.00 (I'd include a few more dollars for postage) I know blogs like this one have an international reach and it would be cool if this little notice generated some poet to poet exchange. One thing a magazine is about is the associations or poeticworld created in combination, all shaking and shining and emiting an energy field. Besides Bernadette Mayer poems in the magazine there are experiments and colloborations, shared compositions, rewritten poems, eight different poems from eight different poets about neutrinos, a superbowl poem by Mayer and  Good (you get the idea).  Philip Good, housemate amd major contributor (I think he drove to Staples), editor of Blue Smoke and wrote the Drunken Bees Poems is found in the magazine. 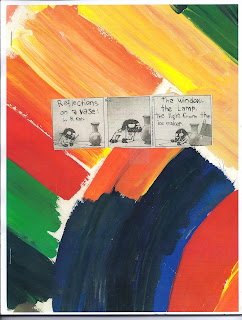 and Others
I notice Bernadette Mayer had a book Mutual Aid published by Mademoiselle de la Mole Press in 1985. I wonder what happened to that Mademoiselle? The 3rd issue of THE TSATSAWASSANS will be poets whose first name is Bill. Here is the opportunity to get ISSUE #2 pick it up while you can ( $7.00 ) at:
THE TSATSAWASSANS
53 Tasatsawassa Lake Road
East Nassau, NY 12062
USA 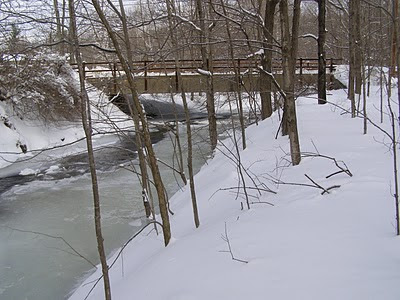 Tsatsawassa Creek and Bridge
Posted by Alan Casline at 7:48 PM No comments: