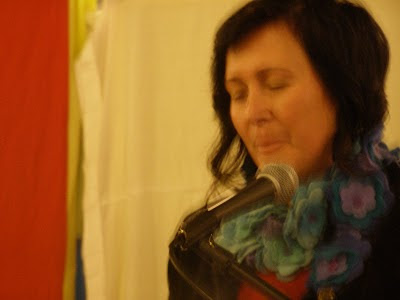 So nice to meet you face-to-face in Buffalo last Saturday. You got to go snowshoeing at a preserve and saw great grackle you said and I arriving early got to walk around downtown with wet snow above, below and running off my hat. I won't pretend I'm noble and gave money to all the panhandlers, just two out of three. For one it was "busfare" and for another "to call home" but the third guy wanted money for a cup of coffee, that's a no...I could of used a cup myself about then, so screw him... I kept walking reading the names of streets. I saw Jefferson Street so I thought it was going to be a President thing but turned out not. As I like to say, I wasn't lost just off the path and I got all swung around somewhere and back to the 468 Washington Street place about a hour later. The trip to hear you read made too much sense in a solid extension of impulse and urge. You live in Austin, Texas and I doubt you will be this close again before our panel in Vancouver. Of our two vehicles, I took the one with 4-wheel drive and living as long as I have in New York State the Thurway becomes a familar road. Wasn't bad, there were bands of storms but nothing that sat down to wait for you, just kind of blowing in and blowing through. Bring Jack Kerouac into it (lunacy, wild foolishness and extravagant folly are the fountain for creative art) so of course I would drive three hundred miles to hear a poem (BALLERINA IN A MUSIC BOX).
Don't get me wrong, not to throw all of my poems out the car window as I drive down Main Street, good sense and my wife's concern meant I had a motel room in Batavia for Saturday night. I got to meet Kenneth Warren and John Roche was there so only Michael Boughn was not in the room. I was not there to make waves. I was explicitly not there to make waves. Calm deep still pool, that's me. Seriously, great crowd & on a stormy night had to be over a hundred people. This is not like a critical review or news report so please, to the other performers "I enjoyed it all" and to say anything is to slight the scope of everyone's efforts. Thanks Just Buffalo and Buffalo Poets Theater and the band Gut Flora. When Hoa Nguyen started to read there came over me a sweet contentment. The first poem out was one of hers I remember best. The NFL football playoffs are on T.V. and she is there in the room pretending they are all celebrating her Aquarious birthday. It is just congruent, weirdly so, as so many poets would detach & maybe add their social commentary but Hoa emerses. Here is the action, the tension and ultimately in the totality of her work the vector towards decency and the good. She brings her poetic consciousness and not judgements, awareness shapes, picking out bits (but I can't say "no joke or no lie" right Hoa?) and then we get it, all the commentary fuzz on the furniture "I disappear - I disappear."
When you mentioned tonic, Spring tonic, I wanted to yell out sassafras root! which the traditional Spring tonic of the St. Lawrence River Valley farmers was kept in a glass jar just inside the door to the cellar and I can remember this one old woman saying her father made her drink four or five swallows every day starting in late March to shake off lethargy. The recipe was secret and could contain a number of ingredients (the mints, ginger, willow bark, etc.) but they all had sassafras root from what I can tell. (Rootdrinker) Any of my good poet friends, I would of yelled out, but I couldn't with you, we are barely introduced. There is something to look forward to or maybe not? I enjoyed when you said "That is the herbal lesson portion" and again you had another lesson for the audience. Handing out lessons as part of a poetry reading that is an opening concept for me. Like hearing Ed Sanders be funny and thinking there is a use for humor and I can

be funny and not be irrelevant. Poet as teacher and we haven't even gotten into the authority of Charles Olson. If you can, send me a copy of your essay that The University of Iowa is publishing in their anthology Poets on Teaching. I say the three hats of poet, editor, publisher are the same hat. You must know about that. Your thread involving grackles interests me and that you hated them at first and then came to love them. UGLY POEM of line "raucous perches" does get ugly, such uglies are the seasonings of reality. There is alot more to talk about when we meet again. We poets have a corner of our own in Smitty's Tavern in Voorheesville. I had Kiss a Bomb Tattoo, your book from Austin's Effing Press, with me on Sunday and it got passed around. Sorry if that hurts book sales and none of the pages were upside down either.
It was cool to talk with you, John and Ken at one time. Maybe using the power of the allmighty staple we can put together a poetry bundle to send around. Hope all is well.

Best, Alan
Posted by Alan Casline at 1:53 PM No comments: