TEXT AS ART IN A COMPARTMENTAL MIND

I thought I'd send a few collage poems to, as it turned out, Nancy Klepsch the curater of a a show called TEXT AS ART held at The Arts Center of the Capital Region. I didn't have high expectations but thought, if they didn't have a lot of submissions maybe my collage poems would fit their criteria and I'd be included in the show. As it turned out the show was small with only seven pieces selected and I made the grade with a bit more RAPIDITAS and I'm told by Nancy exceptionalism (I never said my collage poems weren't good). We had the opening on February 28, 2011 in The Arts Center in Troy, New York. I have a compartmentalized mind. For example I have different publications and do books from my Benevolent Bird Press based on different sections of my thinking which often include different groups of people. Probably most people have different group mailing lists and here I separate even information about what I am doing or new discoveries...send my different arrows flying to hopefully receptive targets.  I try to avoid the hive-mind and the blanket cover of "BIG EGO". The upshot of this is that after attending this TEXT AS ART event, I decided I need to start a new compartment/e-mail list. The show is now over but the effects of the show have the potential to go on. The Albany New York Region has a lot of practicing poets. I throw around the figure of 1000 and it is easily that if you consider the different venues, open mics, workshops, college programs, waitress who hand us doggeral written on napkins, the rappers and slam poets, the country music near-poets  and the Irish...  Experiencing Daniel Nester and Mary Kathryn Jablonski's contribution and reading on February 28th -- I had heard them both "feature read" in the area -- but the context and subject splash of this night just added something and made me think they and the other contributers and myself were held together in a special place. The other disparant souls brought together by Nancy Klepsh were by her design working through different media but the added on energy field of words/text and data rich surface made something different than Albany's 1000 poets all gathered in a single room. Examples: Susan Rivers * "Fabric Memories"; Sara Tack * motion typography; Mary Kathryn Jablonski  * particitatory assemblage poem; Joelle Nadeau Hotaling * poster art; Daniel Nester * first-person conceptual performance and my collage poem.

Seeing is better than reading. I am really just writing this post so I can put up my photographs. The way blogger works if you click on any photo it will enlarge to full screen size. Help yourself! 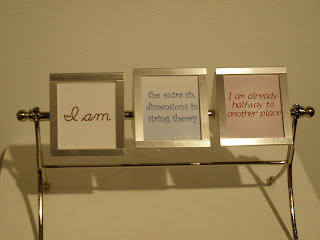 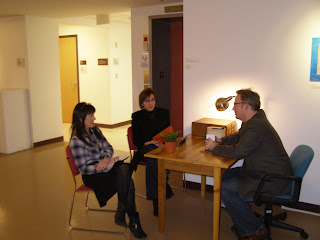 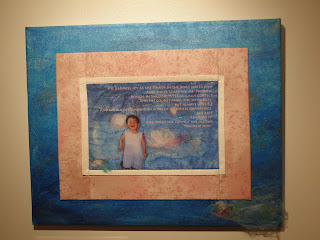 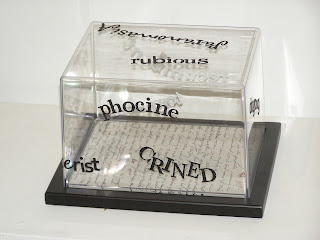 Kate Laity work The Square Root of 1 is 1 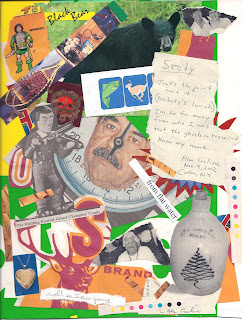 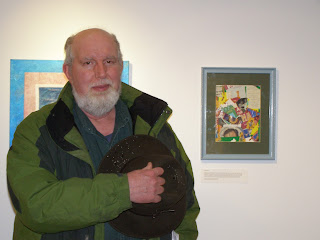