UNLIKELY AS IT MAY BE 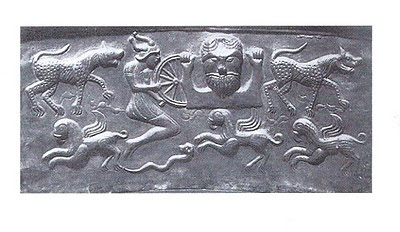 Paul Doty, who is one of the St. Lawrence County members of Rootdrinker Institute, has been doing a blog for a Friends of the Library group at St. Lawrence University in Canton, N.Y.. Unlikely as it may be, he just published my poem ON MY DESK AT COLLEGE IN 1973 (actually it makes sense for it to appear there.) I am curious to observe any reaction from the college community. Meanwhile, I think I have some kind of reverse energy going with Barbara Vink of the Thursday Night Poetry critique group that meets at the Voorheesville Library in Voorheesville, N.Y.. I brought this poem to the group to more or less show Barbara and the others a stretching of poetic form and to give the "is it or isn't it poetry" conversation another consideration from my work. Yet it seems that these experimental(or whatever you want to call them) poems find their own little homes. Somewhere I have the notes where I wrote down every object found in my backpack, either hitch-hiking or coming or going from Honolulu. Now I want to find that scrap as a follow-up. When I got to the blog, I was pleased to find posted the recording that Jason Crane and I did of Albert Glover's poetry reading at Caffe Lena. As I have been telling folks it was a "wish you could have been there" event and now it is available for listening to. Here is the link:

My poem is just down the page with a January 24, 2011 publication date. 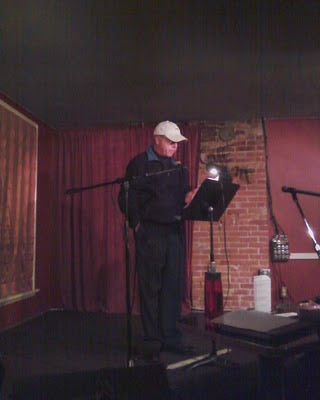 The poet Dennis Sullivan asked me, "What is it about Jason Crane that you like?" I said, "He reminds me of a young Dennis Sullivan." Which stopped the old Dennis Sullivan right in his tracks. Then I gave the rest of the answer. "I like Jason because he is doing things." His jazz blog is a marvel at 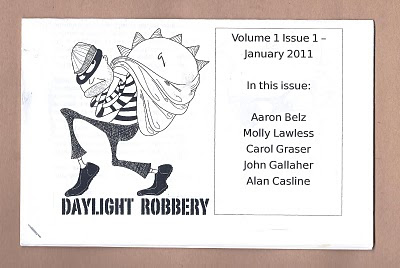 I also like him cause he listens to me. He has started a Zine called DAYLIGHT ROBBERY(Volume 1 Issue 1 - January 20011)and I tried to give him some advise about small press magazines (you know pit falls and mistakes people usually make). His endeavor is low budget by design and necessity. He put two of my New Mexico Rinconada Canyon Blues poems in the first issue. I am looking forward to his selections of poets (a national mix he says). The daylight robbery in my poems had to do with the petroglyphs being next to holes where other petroglyphs were cut out of the stone and then it goes yeah we steal what we see for our poems --we're thieves too. Other poets in the first issue are; Aaron Belz, Molly Lawless, Carol Graser, John Gallaher with design for logo by Carolee Sherwood. Carol Graser is the host for the Caffe Lena poetry reading series . See it all circles around.

Find Jason Crane and DAYLIGHT ROBBERY at info@snafupress.com or by mail at SNAFU Press, PO BOX 8660, Albany, NY 12208. Subscriptions are $5 per year.