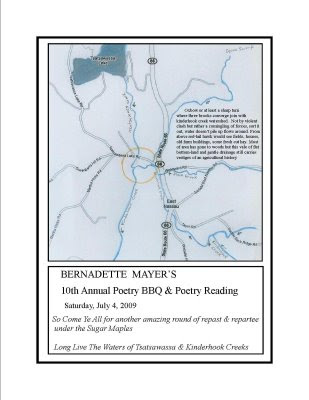 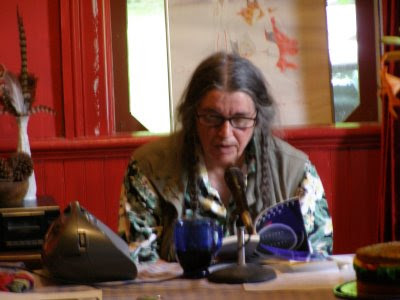 
Bernadette Mayer and Philip Good's place near where Tsatsawassa Creek joins the Kinderhook in East Nassua, New York has hosted great July 4th get togethers and I was fortunate enough to be invited to this year's 10th annual. I really caught the spirit of the event about half way through and by the end I was handing out invitations for poets to do Benevolent Bird broadsides like a month had a hundred days and looking to extend new friendships and opportunity to learn from worthy poets all and even more. O.K., I missed way more than I saw but I did sit through the entire poetry reading and enjoyed some long but easy conversations with folks. I brought a box of free poetry broadsides, my Buffalo drum, wine, and a large strawberry & apple crisp. There were less broadsides in the box when I left. I enjoyed drumming my way to creekside and back to blue sky and cumulus accompaniment (and I wasn't on anything, altho 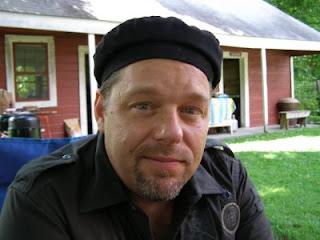 ugh I did notice some of the wanderers had a peculiar smile and look in their eyes).
Susan Deer Cloud and I talked about her publishing plans and the Blue Cloud Quarterly and then Dave Brinks joined us and Susan discovered that Dave is part Cherokee.
I didn't get to eat any of the strawberry & apple crisp but I'm told by those who did it was tasty. I did get to chow on a bowl of the Alligator Crawfish Jambalaya and really enjoyed the flavors and satisfaction which came from the dish.
I got to meet Karen Skelton and Phil Johnson from the Berkshires region. He was interested and we started talking about small press publishing philosophies and Karen is starting a press with the understanding her artist gifts are foremost to any shaping the endeavor undergoes. She is looking towards the more commercial publish-by-demand with printing and binding done elsewhere. I like doing it all, assembling the books by myself, by hand. Time is the cost there but I get some satisfaction from the work. I went out to my car and came back with three different types of books. 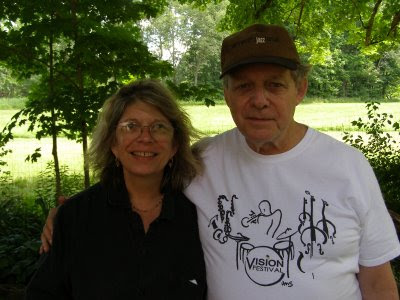 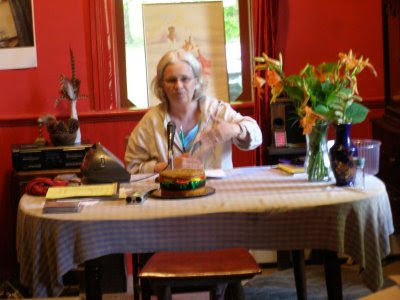 Paulette Swartzfager
The poetry reading began in mid-afternoon with those presenting showing restrain and respect by selecting a few works and then delivering the goods. I didn’t take any notes and so some notable poets will be unreported upon. There was some sort of velvet hamburger to be presented to the best poet or poem? I don’t know who won it but you can see it in some of the photos sitting on the desk. I came to the picnic with Vincent F.A. Golphin, John Roche, Paulette Swartzfager and Susan Deer Cloud and it was nice to see them up behind the microphone and to hear their work. John Roche read Joe the Poet from out of the Big Powwow issue of Rootdrinker. The poem reminds me of The Smokey Bear Sutra and this reading of it also got me thinking there was in it a comment on the New Troubadours we had discussed in regards to local poetics. Dave Brinks came out of the attic and delivered two poems of the moment. The poet from Nigeria wanted to know why poets in America choose the 4th of July for their gatherings of celebration. “Because it is a holiday and everyone has a day off” was Bernadette’s reply although I also see a connection with Philip Good’s comment “Independence Day” which he asked me to insert into the record. I liked Philip's poem. I think he got “watershed” in there. Really, I wish I knew the names of so many of the poets who were all at least interesting (which is my highest praise). I noticed our technological modalities at occasional dissonance. Someone joked the microphone looked like the type used during Senate investigations and the speaker phone cackling was like the radio phone in some mine cave-in disaster movie and when the Blackberries paused the poor poets themselves got froze like a stopped DVD on pause button. But what do I know, my batteries ran out on my digital camera and I still haven’t figured out how to take photos in low light situations although I’m sure it is just a button. However here I can interject, when the nice young lady poet offered me a wild berry from the handful she had picked and was passing out, I was able to tell her she had picked blackcaps, which are near but not the same things as wild blackberries.

Well no more carping about technology, Bill Berkson, Andrei Coidrescu and Simon Pettet came to the reading via dial-up speakerphone. And Tom Gizzi was Tom Gizza and not ORPHEUS. I thought Hector was ORPHEUS but insider knowledge passed me by completely maybe if I had come the other nine years of these parties I’d know. I mean I WOULD KNOW. It has something to do with the pseudo German Indians damming the creek. Someone even wrote a book about mills on the Tsatsawassa but it is out of print and no one can find it. Bernadette asked me about the water quality and I said it was good there was no industry up stream but it comes down to ‘Cup of Water”. Tsatawassa is “Cup of Water” People kept telling me that so I know it is important. 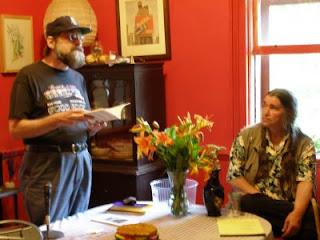 The day reached perfection as I got to have a long conversation with Bernadette Mayer as evening turned to night and a near full moon rose. I wanted to talk about the NYC poetry and culture past and present, which we did some but surprisingly we talked more of the local bio-region. She has explored the area well and it was cool to share memories of places like Pittsfield State Forest, Cherry Plain State Park, Tsatawassa & Nassau Lake and Kinderhook Creek. The challenge she put out to those of us in the conversation around a picnic table to find a nearly famous but not truly famous poet who we all knew. Finding someone “nearly famous” turned out to be tough and when we came up with a name we could not go the next step to find someone such we all knew. Conclusion: 1) There are no nearly famous poets in America; 2) Scary thought , We are the nearly famous poets in America; 3) Since most names were known by half to three-quarters of us, half to three-quarters of the entire poetic consciousness was represented by attendees at BERNADETTE MAYER’S 10th Annual Poetry BBQ & Poetry Reading with poets from NYC, New Orleans, Florida, Rochester, Nigeria, Vermont and other places near and far.
Philip Good was asked as the fantastic day at his home crumbled to an end what his summarily astute pronouncement on the experience might be.
“Tears and cheers” he said
Posted by Alan Casline at 2:34 PM No comments: