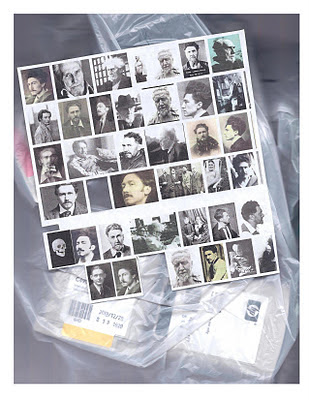 I spent a few months exploring Ezar Pound for a Posey Cafe presentation. It gave me an over all sense of Pound's Cantos that I had not had before. I looked at only four of the Cantos which I picked because they grabbed me and  led me to areas of my interest. I also wrote a bit about my backward travel from the Curriculum of the Soul to Ezar's epic.
going backwards to find Ezra Pound

a poet with an epic poem THE CANTOS

my poetic education through Albert Glover and Jack Clarke, edited and published

A Curriculum of the Soul

understood to be multi-authored time and history capturing like Homer

cause Homer wasn’t one guy and submerged egotism ownership

my education being
neither Clarke or Glover wanting to say their “great project” was they were creating an epic
instead it was aim at the target without looking at the target
empting mind, knowing the target, arrow etc. (zen tricks)
Greek hubris hanging out there with speculation on ancient Greeks, speculation from scholarly sources
while contempory other poets happy enough to make them a target

Olson uses Gloucester history, the lives of past and present Gloucester residents, geological history, and current civic events to anchor Maximus to Gloucester. Sometimes Maximus seems to represent all of Gloucester, and at other times, all of humankind.
--- Carl Carlsen – web-site: Poetry of Places in Essex County

I see Olson walking the streets of Gloucester
Just before or just after midnight
Streetlights on, lights on parking lots and fish-factory buildings, a few bars open
The wind is a sea-breeze, chill night light coat
Clanking sound muted from the harbor
Noises small ships make tugging on their anchoring cables
The hills have curved sections, ridges that ungulate but hold an altitude, rough, the heights
Streets that follow parallel to the shore, go up & down, the city streets
Cut by straight steep roads direct to dock areas
Merchants and old traders homes, substantial, brick-hard, timber-strong
Large man’s large strides, at a pace covers ground, sets a self-propelled wind to mix
With a stronger wind blows clouds high out to sea

“images not from analogy or metaphor
but through synecdoche and parataxis.”

synecdoche:
special for the general make the object the image my red wheel-barrow /the wear on my shoes
general for the special
my hat my house
complex of my thought
shelter of my knowledge
thin shelter from the Chinook knowing the price of milk/scanning groceries

in Canto VII applied to leaders of Irish nationalism
The words rattle: shells given out by shells.
The live man, out of lands and prisons,
shakes the dry pods,
seed case sound from rattling seeds
shell as shell protects the kernel
nut gone loose inside shell
only this year’s food
fed no land or prison
escaped that
more dangerous without

parataxis:
act of placing side by side

parataxis a foundational element in the poetry of Wallace Stevens. Rae quotes Stevens in saying that parataxis offers an “ambiguity that is so favorable to the poetic mind.”
--Patricia Rae, in her essay “Bloody Battle-Flags and Cloudy Days: The Experience of Metaphor in Pound and Stevens"

connections left for reader
only seemingly disconnected fragments
without those connector words
like knife, pencil nub, shiny copper button, paint brush
all in a compartment
built into a desk drawer

Live man goes down into the world of the dead

Pound more alive than the rest of us
through “directed will”
moves “the outward crust”
of time, place

reveal past glories make a new age
not to destroy, clearing ground
mistake of Futurism, chrome hubcaps
mod use of words
like language stripped of prior meaning
- unrooted -

poetry not fodder for the common people,

language charged with meaning to the utmost possible degree

Posted by Alan Casline at 12:28 AM No comments: