CHARLES OLSON AT THE HARBOR by Ralph Maud 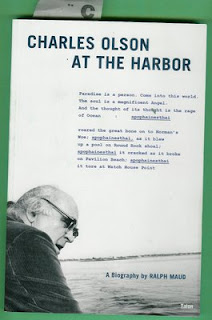 Had enough interest in Ralph Maud's biography CHARLES OLSON AT THE HARBOR to read it in three days. I knew most of the particulars of Olson's life and was aware that Maud's book was a counterview to another biography of Olson by Tom Clark CHARLES OLSON: THE ALLEGORY OF A POET"S LIFE. It wasn't till I got about two chapters in that I realized this was no telling but a critique and opposition based on Maud's scholarship and personal experience of Olson. He tries at points to give Clark his due but at a ratio of about 10 to 1 points out "mistake" after "mistake". Chapter, verse, particle, page number, letter, nuance, pharmaceutical, the words right after the words or the words right before the words. I know people really care about this detail, I'm not being snide. Maud's larger point that Tom Clark has a strong prejudice is adequately demonstrated. I wish that he had delivered a counter biography with little or no mention of the earlier work. Again, I understand there has been some taking sides and Maud is playing to his strength. He sees his literary forebearer as James Boswell with Charles Olson as Samuel Johnson with an important job to be, as he quotes Boswell, the hope to present a true and fair delineation. I couldn't even begin to enter this quandry. There are not enough biographies yet.
The Berkeley Reading that Charles Olson gave July 23, 1965 is a event of divided opinion. The audience and later interpreters find lots of room for different experiences. If we ever achieve the trick of time travel, I expect Olson's reading to be a favorite destination of poets and literary historians. I've read parts of the transcripts and don't find them any more difficult than other Olson transcripts. Context and environment of course effect the doors of perception. Call it crowd mentality, gestalt, collective group consciousness -- whatever the reason, Olson didn't connect with the people in his audience that night. Many luminaries, admirers, associates were numbered among the casual designates in attendance. Olson arrived drunk and drinking according to Robert Duncan. Olson had been given two dexamils "in some stupid sympathy" in the attempt "to lift him out of his actual depresset pre-reading temper." This I do notice from the transcripts I've read, Olson's language shows signs of speed freaked racing with thoughts at time struggling to connect trains of cognitions that had long left the station. What you might expect from the mix (how the evening might have differed without the dexamil?) Tom Clark considered Olson's performance "intermittently coherent". Ralph Maud wasn't at the event but undertook the task of recreating it "accurately on paper for myself and others." The Muthologos version appeared in print, I think that's the one I read from. Here in the current book he writes Olson gave "a brilliant talk/reading: fragmented, disturbed, and chaotic on one level, but completely lucid on another."
Albert Glover told me that upon returning to Buffalo after his Berkeley reading Olson appeared to have experienced something momentous. Both liberation and despair over what he took to be the irreparable loss of friends who had not supported his new outpourings. CHARLES OLSON AT THE HARBOR ends sparsely saying little about Olson's return to 28 Fort Square and the late period of his writing. Applying the ruler that measures human behavior, I see Olson as a great enough poet and thinker to be called a major literary figure. He is a vast enough ocean of complexity that we can swim in his expression and set our personal narratives on different paths in his story. If he is epic, his words will inform and teach us, generations onward... His personal habits apply to us now in time because we share his context (some more than others). Later readers will have the luxury of less context and more focus on the poems. Glover calls for our understanding of Charles Olson to be developmental in his biological and emotional chronology. Of course his many friends and associates each want "their" Olson to be "the" Olson. I'm not opposed to that. The unqualified dimensional picture can only be clarified by observing multiple points in the cosmic grid. Writers, describers, editors, scholars all may add to the show. I'd have to get philosophical to say anything more and poetic to say anything beyond.
I do think the most interesting Charles Olson to the local poets I talk with is the life's end Olson of Gloucester, Massachusetts. Early bio-regional poet Charles Olson.... (not really, but see how easy it is to go there)
The landscape (the landscape!) again: Gloucester,
the shore one of me is (duplicates), and from which
(from offshore, I, Maximus am removed, observe.
from poem by Charles Olson THE LIBRARIAN
Posted by Alan Casline at 4:00 PM