It started out innocently enough, I mentioned so many of the fascicles of A Curriculum of the Soul were printed by mimeo and they were so beautifully done. "Because of Guy Berard," Albert Glover said. Berard was the artist and designer involved. "Where is the machine, I'd like to take some photos of it?" I asked. "You did the printing yourself, right?" "Photos, yes, photos - that's a good idea, that's a very good idea.." he said looking me up and down as if measuring something in a distracted way. "Can't do it today. You'll have to come back tomorrow, today we have the..the piano tuner. Yes that's it the piano tuner. Come back tomorrow at three. The mimeo is not here. It is up on campus. We'll go tomorrow." The next day he drove. Said he'd be able to find parking. I noticed a small archaic symbol and mystical number combination struck to his window. "This will let us pass." he said. The road turned and twisted in the labyrinth of odd appearing building. They were typical two and three family wooden structures like those found in rundown slums through-out the Northeast. Yet these had no peeling paint and there were crowds of carpenters swarming the buildings, rebuilding porches, replacing weak boards and putting on new shutters. I was hopelessly lost and feeling more discontent looking over at my intently focused driver.

The unreal village went on forever. Suddenly he swerved, miraculously a place opened, where I saw none but a moment ago. "It has been thirty years since I have been this way." Glover said. "I must go first, to be sure the way is still open."
We entered a building and walked through the corridors with more strangeness. There were no people living here, just desks, offices with people sitting with piles of papers before them. They all seemed to know Albert. They said hello while ignoring me. I wondered how many others had been lured on the path I was on. We came to a door 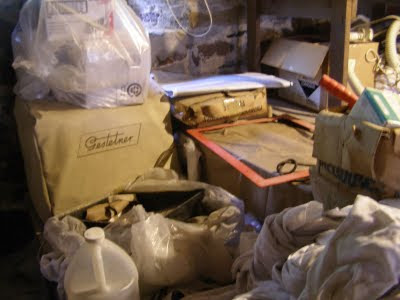 which opened on to steep descending stairs. I took a deep breath and began my descent. They way was dark, time had no meaning on the endless stair. At last we came out in a subterranean grotto. Glover began speaking. "The mimeo machine is a Gestetner and there is a stencil maker also. They were left over here, in this corner." Quietly, carefully he began removing centuries (or maybe thirty years) worth of debris. There they were. My breath caught. I took out my camera and began taking pictures. Glover kept removing accumulated coverings. He maneuvered the printer till it came loose.
"We are taking these," he said daring me with his eyes to say "no". "Yes, lets do it," I said.
He grapped one end and I the other. A different doorway suddenly came into view opening to the daylight and green grass. We carried first the printer and then the stencil maker to his car and he drove us back to his home. Taking the mimeo printer out of the trunk and downstairs to his study area he said "Pat is going to kill me!" It was the obligatory remark of any married man which could have been left unsaid as it was alreadly implied by the situation. 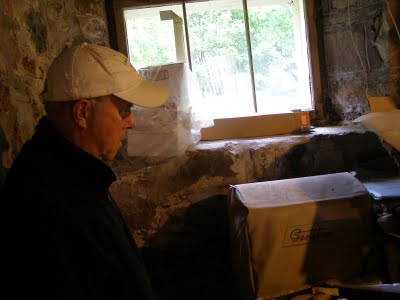 The Gestetner machines were set up in a sort of altar area in a side room. Instead of incense an open can of mimeo fluid would be used during ceremonious visits. (Special Warning: Do not breathe in the mimeo fumes in imitation of the Rites of the Delphi Oracle). "It will never run again," Glover says. I respond, "You know how I've spoken of ambrosia. A different way of measuring life, not the bio way but by the life that is in something. Something has more life in it, it has more ambrosia. You can see it like a bowl of fresh picked fruit or a special bright beautiful day. If you drink ambrosia, that is the life that is restored. Those Gestetner machines have more life in them now then they did before." "Ambrosia," Glover says, "that is a good name for a magazine."
Posted by Alan Casline at 7:52 PM

Labels: A Curriculum of the Soul, Albert Glover, Olson Cult